Early days I know, but so far, so good.  The Android Studio install was painless.  Only issue was having to grant a security exception to allow HAXM to be installed, but other than that, the Studio install process was really slick and easy.

I was able to pretty quickly get an emulated device to appear, and I came here to declare success, but I realize it’s been sat on the boot screen for a while.  And with that, I complain and it’s up, though there’s the spinning wheel.  Still not happy.

I’ve killed it from the menu bar, and am trying again from the play button inside Android Studio.  Looks somewhat happier, and I even managed to get a screen grab. 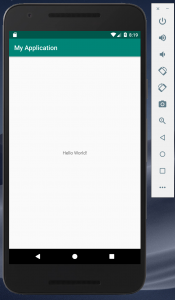 But then all hell broke loose, and the emulator crashed again.  I shut down and restarted Android Studio, and Hello World! is back, but I shall definitely keep an eye on it.

So yeah, easy install.  Looks good.  Fast compiles.  Emulator seems snappy, but the crashes and hangs are a bit worrying.  Watch this space!